The use of modified RNAs as a therapeutic platform is an exciting new area of research made possible by recent advances in synthetic biology. 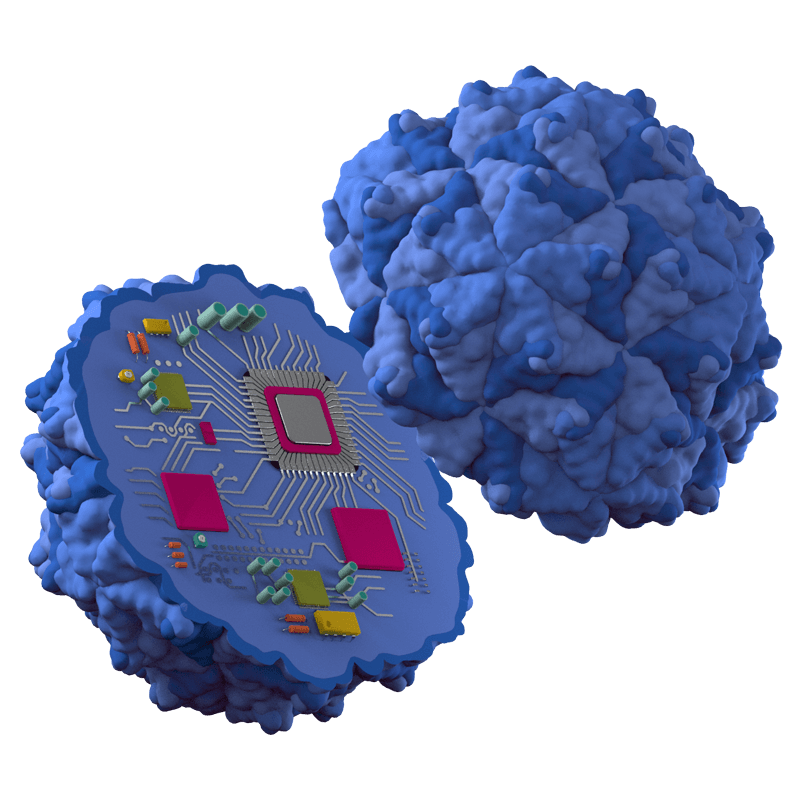 At tenOever Lab, we are developing a self-amplifying RNA that is both programmable and amenable to viral packaging. We achieve this by combining synthetic biological circuits with our self-replicating RNA platform to generate biocomputers that can perform complex operations with different sets of user-defined inputs.

The core processor for these designs are novel arthropod-specific viral RNA dependent RNA polymerase (RdRp) scaffolds which ensure both a minimalistic design and a lack of unwanted host interactions in mammalian cells. To program these constructs, we apply microRNA-enabled logic gates in conjunction with both activators and repressors of replicon biology. The idea put forth here is to generate a toolbox of adaptable and tunable logic-based replicons that will serve as a new biomaterial for genetic manipulation or gene delivery of any desired cell type or eukaryotic host.

Based on the current knowledge of these viruses, we synthesized the minimal components to enable their self-amplification as a starting platform. For V1, we generated a construct that can be in vitro transcribed and directly introduced into cells. For V2, we engineered bi-directional plasmids that generate both vRNA and mRNA from each individual plasmid. Once launched, each of these self-amplifying RNAs can be fitted with selection markers to enable functionality in non-insect hosts. Once a desired level of activity is achieved, the addition of logic gates can be applied to generate variants to define functionality as it relates to cell lineage.

Tool 1: Defective interfering particles – We designed and synthesized IAV to encode Cre recombinase.  The resulting virus maintained virulence but allowed us to track infected cells through use of the TdTomato reporter mice, which indelibly labeled cells upon the introduction of Cre.  These mice were infected with a near lethal dose of our Cre-containing virus and we sorted CD45-/TdTomato+ cells at 0, 1, 2, 5, 10, and 20 days post-infection. These data demonstrated that while 95% of the cells die in the first 5 days of infection – a combination of Type I and II alveolar cells – there is a sustained population of TdTomato+ Club cells that are still present on day 20.  Based on these data we, and others in subsequent follow up studies, have discovered that Club cells launch a unique antiviral response that renders them better able to control virus replication.

Tool 2: We also use the genetic real estate of RNA viruses to incorporate artificial miRNAs that we re-wire to silence host factors. These designs not only enable a means to perform an in vivo RNAi screen, but they have revealed a unique activity of the host microprocessor which can function in the cytoplasm in the presence of a primary miRNA transcript.   We have applied these plug-n-play moieties into both IAV and Sinbis virus and enabled them to specifically target murine host genes.  In both examples, in vivo virus passaging identified specific hairpins that enriched over time, indicating the selective advantage that was achieved as a result of the virus-mediated silencing of a given host factor.  This experimental platform has identified many known factors involved in both the Type I and III interferon pathways and revealed a number of non-canonical targets that also limited virus replication.

Tool 3: Our most recent viral plug-in focuses on DNA editing.  The capacity to edit genomes using CRISPR-Cas systems holds immense potential for countless genetic-based diseases. However, one significant impediment preventing broad therapeutic utilization is in vivo delivery. While genetic editing at a single cell level in vitro can be achieved with relatively high efficiency, the capacity to utilize these same biologic tools in a desired tissue in vivo remains challenging. Non-integrating RNA virus-based vectors constitute efficient platforms for transgene expression and surpass several barriers to in vivo delivery. However, the broad tissue tropism and their propensity to induce cytotoxicity raises the concern for off-target effects and unwanted immunological responses. In an effort to circumvent this, we built a chimeric RNA virus that exhibits cell-specific activity and self-inactivates.  We achieved this by combining host miRNA biology with the CRISPR-Cas12a RNA-guided nuclease. Exploiting the RNase activity of Cas12a, we generated a vector that self-inactivates upon delivery of Cas12a and an accompanying CRISPR RNA (crRNA). Furthermore, we engineered the virus so that maturation of the crRNA can be made dependent on cell-specific miRNAs, which confers further specificity. We have found our resulting chimeric virus delivers sufficient levels of Cas12a to achieve effective genome editing whilst inducing a minimal immunological response. It can also function in a cell-specific manner thereby facilitating in vivo editing and mitigating the risk of unwanted, off-target effects. At present, we are designing microglial and neuronal specific editors targeted to the stop locus of the TdTomato mice.